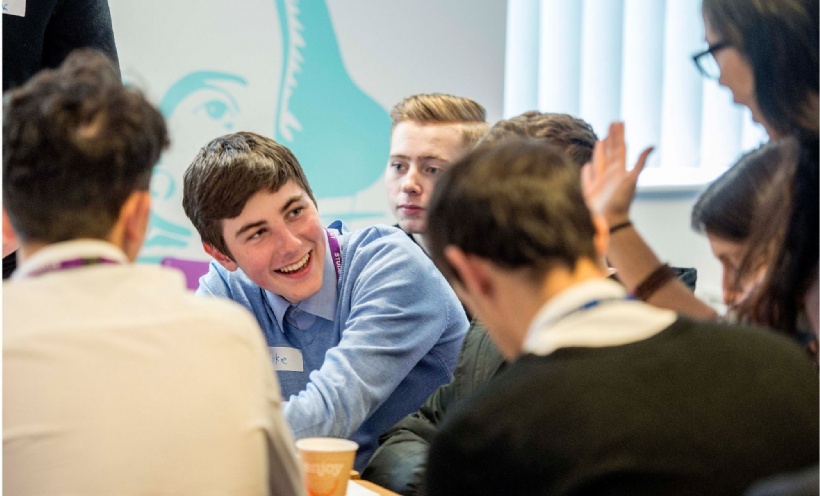 This year there’s a new challenge for Creative Education Trust sixth formers to take on. Conceived and delivered in partnership with the Design Management and Cultures course at London College of Communication (University of the Arts London), the Sixth Form Creative Prize is a vehicle to give young people insight into the working practices of the creative industries.

The competition brief is designed to get them thinking about issues of local and national importance:
‘Research and develop a campaign, service, spectacle or product that has the potential to improve a particular community.’

When sixth form heads and teachers were canvassed about the issues they felt were troubling the local community, homelessness, mental health, and public spaces for young people surfaced as areas ripe for research and innovation.

To start off the challenge, forty-eight students from the four sixth forms gathered at Abbeyfield School for a workshop lead by Mo-Ling Chui, Noemi Sadowska and Robert Urquhart of University of the Arts London. After a brainstorm on each of the issues, a series of ‘What if’ questions asked students and teachers to imagine how they would help the communities if reality were not an issue. What if you were Harry Potter and could use your magic to help the homeless? What if you were Google and had access to lots of technology? What if you had £1m? What if you had access to any space in the community? The UAL team were quick to point out that this was not just for fun, but that imagining a fantasy solution can and often does spark a realistic one.

Stakeholder mapping was a crucial step in to discovering not only who is directly affected by an issue, but who is in the wider supporting community, what is the chain of influence and where would the students be most able to effect change and improvement. Students left the workshop with formed ideas of who they could talk to, who they could support, and where their own power and strengths lie.

The project explicitly encourages and rewards multidisciplinary interaction between students. Since the participants were drawn from a broad range of subjects – including maths, languages, sciences, social sciences, art and design – the exercise was a first foray into creative processes for many. One head of sixth observed with satisfaction that everyone was “well out of their comfort zone”.

Creativity and the Future of Work, a report published earlier this year by the Creative Industries Federation and NESTA, predicts that occupations within the creative industries will grow by 5.3% by 2024, as compared with overall growth across all sectors of 2.5%. Furthermore the report stresses that the interpersonal skills of collaboration, communication and social perceptiveness will be in especially high demand by 2030. Collaboration will be key. This cross-Trust competition therefore, the Creative Prize, will be awarded to a team for collaborative effort and achievement, not to an individual.

After a period researching and giving form to their ideas back in school, the student teams are invited to London in July to work with staff at the London College of Communication on a publication to explain their proposals. Teams pitch to an expert panel in September during the London Design Festival, and a winning team will be named.